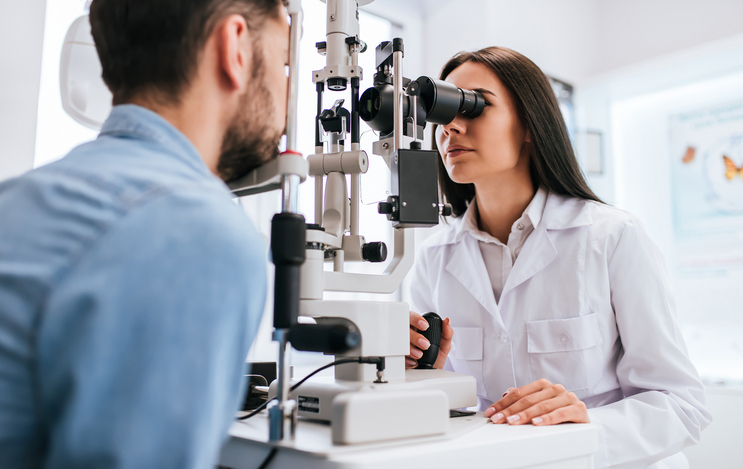 What is Diabetic Eye Disease?

Eye problems as a result of complications of diabetes are called diabetic eye diseases.

• Cataract: The ocular lens gets blurred and loses the opacity. Cataract is seen at the early ages with the diabetes patients.

• Glaucoma: Increasing intraocular pressure and damaging the visual nerves. People with diabetes has the double risk of glaucoma.

What is Diabetic Retinopathy?

The structure of the veins is degenerated, and bubbles occur, lead to bleedings and leakage of the fluid from the veins to the surrounding tissues. On the later stages, new buds occur on the retina and leads to sudden intraocular bleeding.

The visual impairment develops at the later stages of diabetic retinopathy. Because of that a diabetes patient who doesn’t have any problem with the vision also should have regular examinations. Both eyes are mostly gets affected by diabetes and might lead to blindness

2) Mid Non - proliferative diabetic retinopathy: Vascular occlusions occur on the veins and bubbles on the retinal veins are increased.

4) Proliferative diabetic retinopathy: Lack of oxygen in the retina is increased, retina is unnourished and danger signals are sent to the brain after the appearance of unreliable new veins. These new veins are very fragile, carrying the risk of bleeding and sudden visual impairment.

Who Has the Risk of Diabetic Retinopathy?

Everyone who has the Type 1 and Type 2 Diabetes, has the risk of Diabetic Retinopathy. Every single diabetes patient should have a detailed retinal examination at least once a year with the pupils dilated. The risk of diabetic retinopathy increases directly related to the history of diabetes disease.

Pregnancy is also a risk for those who has diabetes. Retinal examinations should be performed often during the pregnancy.

What Are the Symptoms of Diabetic Retinopathy?

Diabetic retinopathy is an insidious disease. There are no obvious symptoms at the early stages, and it is a painless disease. Symptoms shouldn’t be waited to have an examination; it is recommended to have a check at least once a year. Blurry vision occurs as a result of accumulation of macular oedema at macula. At the later stages, if the undesirable and unhealthy veins occur, they might bleed suddenly, and visual impairment can immediately occur.

What are the Indications of Proliferative Retinopathy in the Case of Bleeding?

Seeing flying objects is the first and most common indication in case of sudden bleeding. The vision might be totally black after a while. In the case of seeing flying objects, it is recommended to have a detailed retina examination and have the necessary treatment. If not, bleeding increases and the loss of vision is expected. Sudden bleedings are mostly experienced early in the morning when sleeping. In some cases, the bleeding stops itself and the vision comes back. However, this is a misguiding situation and there is the high chance of relapse. An examination is a must in every case of bleeding

Diabetic retinopathy ends up with visual impairment if not treated. An early diagnoses & treatment can help you keep your vision.

Visual Acuity Test: Is a test from a certain distance to examine Woll-alike stains how well the patient can see.

Retinal Check: Pupils are dilated with certain drops and a detailed examination of retina is performed with different kinds of lenses.

Fluorescein Angiography: A fluorescein angiography might be recommended by your physician during the retinal check if needed. A colorant is injected through the veins and retinal photography is performed from both eyes in order to generate a map of retinal veins. Treatment is given accordingly.

How is Diabetic Retinopathy Treated?

Especially in the early stages, there is no need for a treatment if there is no macular oedema. Blood sugar, blood pressure and cholesterol should be under control in order to prevent diabetic retinopathy progress.

It is unfortunately not possible to perform this treatment in the presence of strong bleeding. Vitrectomy operation is suggested if the bleeding is very dense. Blood is completely cleaned with vitrectomy and laser is performed.

How Diabetic Macular Oedema is Treated?

Diabetic macular oedema is treated by laser. Mostly, one session is enough however on some occasions the treatment might be repeated. If there is macular oedema in both eyes one should be treated a few weeks after another.

These medications, which are injected in the eye can be used together with the laser or alone and might improve the vision. But it should be kept in mind that Anti – VEGF treatment is a surgical intervention and an injection inside the eye. So, there are the risks of infection, retinal tears. It should be performed in a sterile operating theatre by experienced surgeons

Treatment of the Bleeding Caused by Vitrectomy Surgery in Diabetic Retinopathy

Vitrectomy is performed if there is intraocular bleeding related to diabetic retinopathy. Vitrectomy can be performed under general or local anaesthesia which will be decided together with the patient. The vitreous gel and bleeding are cleaned with special thin devices which are entered through very tiny holes that are created on eye wall. The suctioned gel is replaced with a medical liquid called “balanced salt solution”. In the same surgery, retinal laser treatment is also mostly performed together. One month of protective eye drops are prescribed mostly.

Diabetes is a systemic disease. The health of the eye is directly related to blood sugar, arm tension and cholesterol. A total treatment of diabetic retinopathy is not possible. Some damages are permanent. The treatments might fix some of the complications that diabetic retinopathy may have caused. 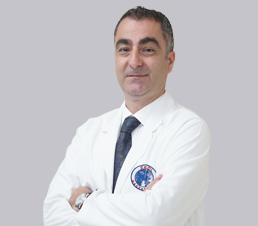 He graduated from the Faculty of Medicine at Hacettepe University (Medium of education: English) in 1997. He completed his specialty in Ophthalmology at Ege University Medical School, at the Ophthalmology Department. He became an Assistant Professor in 2006, and an Associate Professor, in 2010 and received the Professorship title in 2016. In 2003, he received a training on retinal and vitreoretinal surgery at the University of Helsinki's Cornea and Refractive Surgery and in 2017 as a visiting physician at the retinal section of George Washington University in the USA. His main areas of interest are Cataract, Retinal Diseases (Diabetes, Yellowhead Disease, Retinal Vein Diseases etc.), Corneal Diseases (Keratoconus, Dry Eye, Conjunctival Surface Diseases), Uvea (Behçet's Disease) Diseases. He scored over 6000 surgical cases in these areas. He has 36 scientific articles which have been published in international scientific indexes. He has over 80 presentations in various congresses. He has worked as a chapter writer and book editor in Turkish ophthalmology books. He has attended many national and international scientific meetings as a lecturer and panel speaker. He is an active member of the Turkish Ophthalmology Association (TOD) Cataract and Refractive Surgery Unit (2010), Turkish Ophthalmology Association (TOD) Cornea and Ocular Surface Unit (2010), TOD Uvea Unit (2010). Prof. Dr. Sinan EMRE can speak English. He is married and has one child.
Prof. Dr. Günhan Erbakan 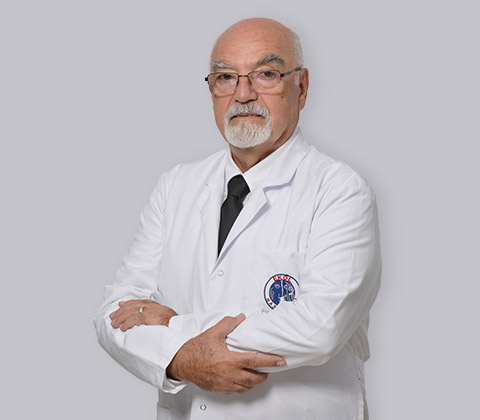 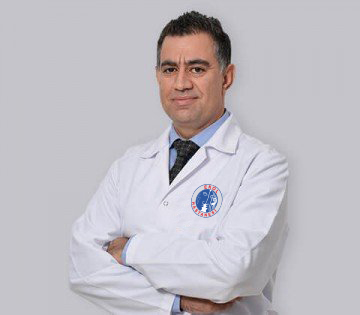 Dr Esat Çınar was born in Diyarbakır in 1976. He started İstanbul University, Faculty of Medicine in 1997 and graduated in 2003. He completed his speciality degree between 2003 and 2009 at İzmir Ege University, Faculty of Medicine, Ophthalmology Department. He was in charge of Glaucoma and Cornea Departments as a Deputy Associate Professor in İzmir University Hospital Faculty of Medicine, Department of Ophthalmology. He studied “Keratoplasty” in Ege University, Faculty of Medicine for 6 months (also known as “eye transplant”). He also was in charge of the controls of the premature babies’ in İzmir University Ophthalmology Department. He attended the course for vivisection both in clinical and laboratory fields for one month. His special interests are; Cataract surgery (multifocal, trifocal and thoric intraocular lenses), Cataract surgery with laser (Femtosecond Cataract), Keratoplasty, glaucoma surgery (non-penetrant surgeries such as viscocanalostomy, deep sclerotomy), Excimer Laser Surgeries (Lasik, Lasek, PRK), medical retinal diseases. He has many published articles in international indexes. He has many verbal and written presentations in national and international scientific meetings. He is an active member of the Turkish Association for Ophthalmology. He speaks fluent English and has one child.
Opr. Dr. Gökhan Erbakan 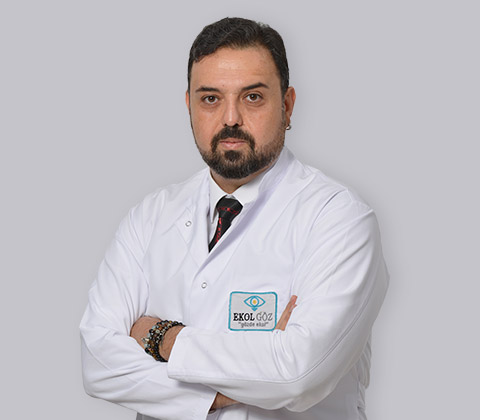 He was born in Izmir, in 1971. He attended summer school at Mids School of English, Eastbourn, England for learning a foreign language while he was in Bornova Anatolian High School and graduated with a high degree. He started his medical education at Ege University and continued with his specialization at JL Uni-Giessen, Germany, where he had the chance of working peer to peer with names such as Prof. Dr. Karl W. Jacobi, Prof Dr. Herbert Kaufmann, Prof. Dr. S. Pavlovic. Then, he found the opportunity to further his education in the field of refractive surgery by working with the most important names, such as Prof. Dr. T. Kohnen, JWG Uni-Frankfurt, Prof. Dr. I. Pallikaris, University of Crete, Prof Dr. Mahmut Kaşkaloğlu, Ege University Faculty of Medicine and Kaşkaloğlu Eye Hospital. Besides, he did scientific studies about medical glaucoma treatment, which is his other field of interest, with Ass. Prof. Dr. Karl Georg Schmidt, CGC Uni-Dresden. He is a member of DOG, ESCRS, ISRS of the AAO and TOD. He is married and has one child.
Opr. Dr. Lider Çelik 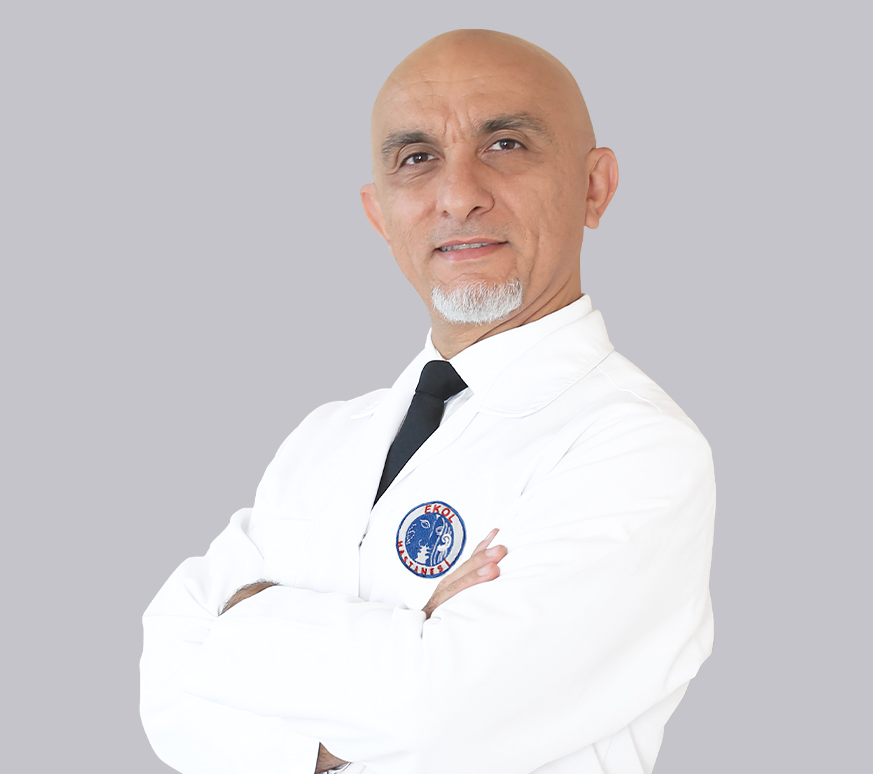 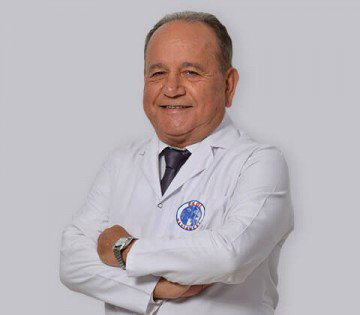 He graduated from Istanbul University, Faculty of Medicine and completed his specialty training in S.S.K Istanbul Hospital in 1984. He worked at Çanakkale State Hospital between 1984 and 2007. After 2007, he worked in private sector health units. He is an active member of The Turkish Ophthalmology Association and American Cataract and Refractive Association. Anterior segment (cataract) medical retina, glaucoma and contact lens are his areas of interest. He has a good command of English.
Opr. Dr. Gökmen Yıldırım 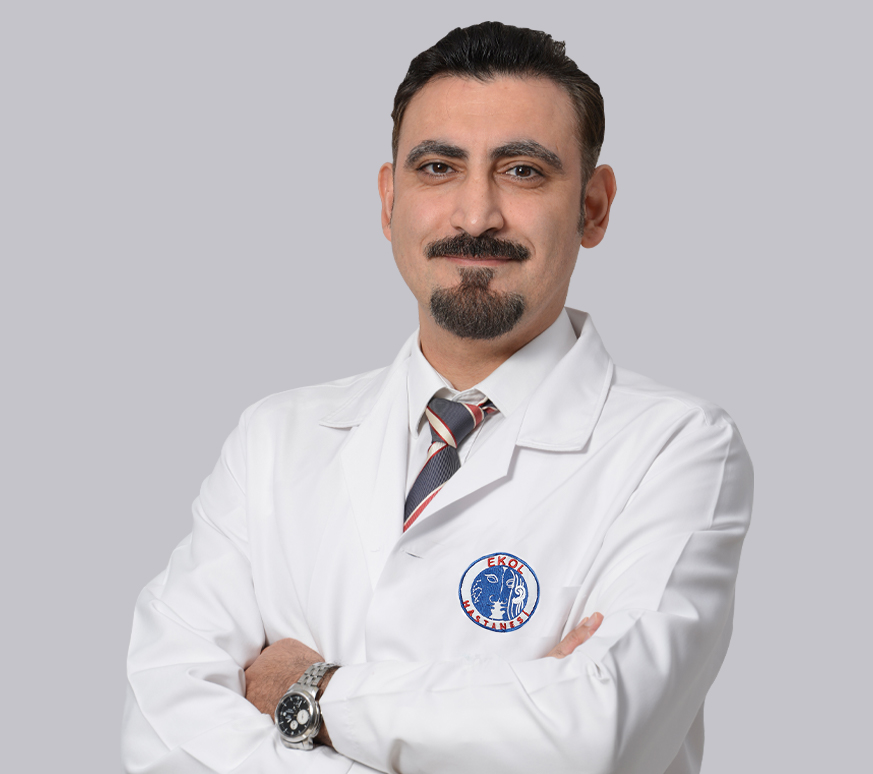 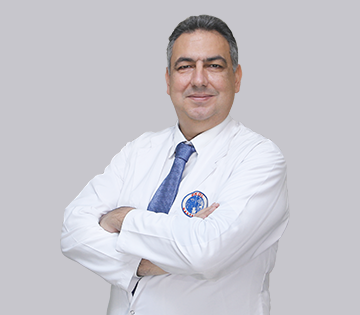 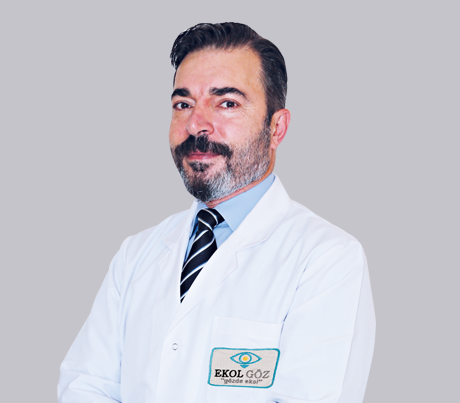 He graduated from Dokuz September University Faculty of Medicine in 1996. He completed his specialized education in the Department of Ophthalmology of the Faculty of Medicine of the Aegean University between 1996-2001 and earned the title of ophthalmologist Dec. He has published numerous scientific articles that fall into international scientific indexes. There are numerous oral and poster presentations to national and international scientific meetings. He is an active member of the Turkish Ophthalmology Association (Tod). He speaks good English, Opr. Dr. Uğur Karagöz is the father of 2 children. Special interests: Cataract surgery (multifocal, trifocal, Toric intraocular lenses) Cataract surgery with laser (Femtosecond Laser Cataract) Excimer laser surgeries (Lasik, Lasek, PRK) Medical and surgical Retina Eyelid Surgeries
Opr. Dr. Hasane Pehlivan Yoleri 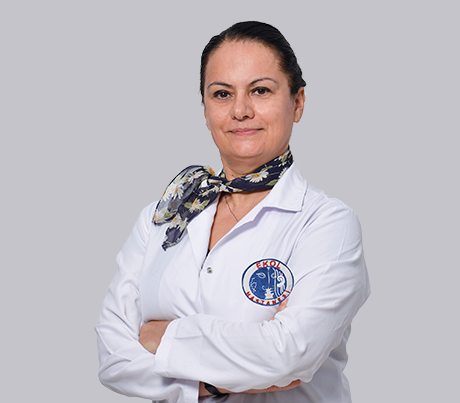 Born in Cyprus Serdarlı, he graduated from Nicosia Turkish High School. He graduated from Dokuz Eylul University Faculty of Medicine. He completed his specialization in Atatürk Health Site Yeşilyurt State Hospital with his thesis on the comparison of the rear camera lens application and the front camera lenses, which was started to be applied for the first time in the clinic under the management of Zühal Çakırca, the clinical chief. She worked as a contact lens center in İzmir for three years and then as chief physician at Karşıyaka Kızılay Fatma Kutluay Dispensary. He continued to work in Karşıyaka by establishing the Private Yalı Polyclinic in 2005 and the Private Yalı Eye Health Branch Center in 2007, his special interests are refraction and contact lenses. He is a member of the Turkish Ophthalmology Association.
Opr. Dr. Gazi Duman 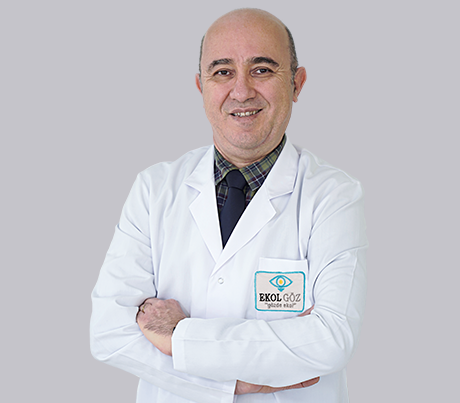 He graduated from Ege University Faculty of Medicine in 1989. Specialization he completed his education in Izmir Education and Research between 1991-1994. He completed his Ophthalmology Department at the Hospital. International A large number of scientific articles included in scientific indexes have been published. Numerous oral and poster presentations to national and international scientific meetings has a presentation. He is an active member of the Turkish Ophthalmology Association (TOD). Fluent in English, Opr. Dr. Gazi Duman is married and has two children. Special interests: Cataract Surgery (multifocal, trifocal, toric intraocular lenses) Cataract Surgery with Laser (Femtosecond Laser Cataract) Excimer Laser Surgery (Lasik, Lasek, PRK) Medical and Surgical Retina Eyelid Surgery Strabismus Surgery